I installed Catalina 2 days ago and now my 2019 iMac is very slow, click to open an app, wait 4 or 5 seconds and nothing happens, then the spinning rainbow wheel of death appears for a few more seconds, then the app opens. This evens happens when opening System Preferences or Activity Monitor. I have restarted multiple times and the iMac has been left shut down for a few hours before restarting.

Late 2013 21.5" iMac, 8 GB Ram, 1TB HDD. After update to Catalina 10.15.1, the thing was turning into a brick. Nothing worked, Office 365 took 3-4 attempts to launch and only did so after 10 minutes. Chrome, Firefox, Safari were crashing continuously. Creative Cloud, Photoshop, Lightroom, a nightmare. Performance was slow and buggy across the board. Wanted to throw the thing out of the window but, being stubborn, decided that no machine and some crappy software were going to beat me. The age of Terminator ain't not quite here yet. Started in Safe Mode, suddenly everything worked, like a gazelle compared to a Soviet agricultural tractor of the 1950s. It wasn't a matter of CPU or Memory usage, which were all well within the green. Here's what worked for me:

Turned off Siri, since I don't use it.

Removed most of the extensions that I wasn't using anyway, almost 90% of them.

Turned off Notifications for all the things that I didn't care to know about in real time.

Made sure that there were no unneeded Login Items under the User and Group preferences (which in my case were none).

This improved things somewhat, but it was still not performing as expected.

Removed all the Adobe and Creative Cloud processes that were running in the background and prevented them from launching at login in the first place by deleting all Adobe launchers in HD/Library/LaunchDaemons, HD/Library/LaunchAgents and usr/Library/LaunchAgents. That did it. Restart, and suddenly everything worked. The Verifying App dialog now takes 2-3 minutes instead of an hour, Office 365 launches in 20 seconds, all three browsers launch in seconds as well. Adobe apparently is not yet fully compatible with Catalina and just messes everything up in the background. Will use GIMP for the time being. If I have to use Photoshop or Lightroom for some reason, will have to do a quick file cleanup afterwards - like cleaning up after your dog. Now the birds are out, the sun shines, and I feel like a better human being. Hope this helps!

Have a look at the memory tab and see what is using memory. My 2015 iMac was running very slowly when RAM was all used because a Swap File on HDD was in use. In my case it was Music but ......

I'd also observe that since sorting the number of issues and using machine it seems to be speeding up further with time which make me wonder about indexing etc.

Sorry, cannot be much more help.

Agree. You don't have a swap file active and memory pressure is in the green. Other place to check is disk tab for similar issues. You now need wiser minds than mine for this one!

If Music is running in this mix see relevant post here. That will be likely cause.

Thanks, but as you can see I don't have music or anything much else running. I actually timed how long it took the Activity Monitor to open that time (sad, I know!) and it was 7 seconds.

It's like I've gone back in time 15 or 20 years to a time when everything was slower and took longer to happen. 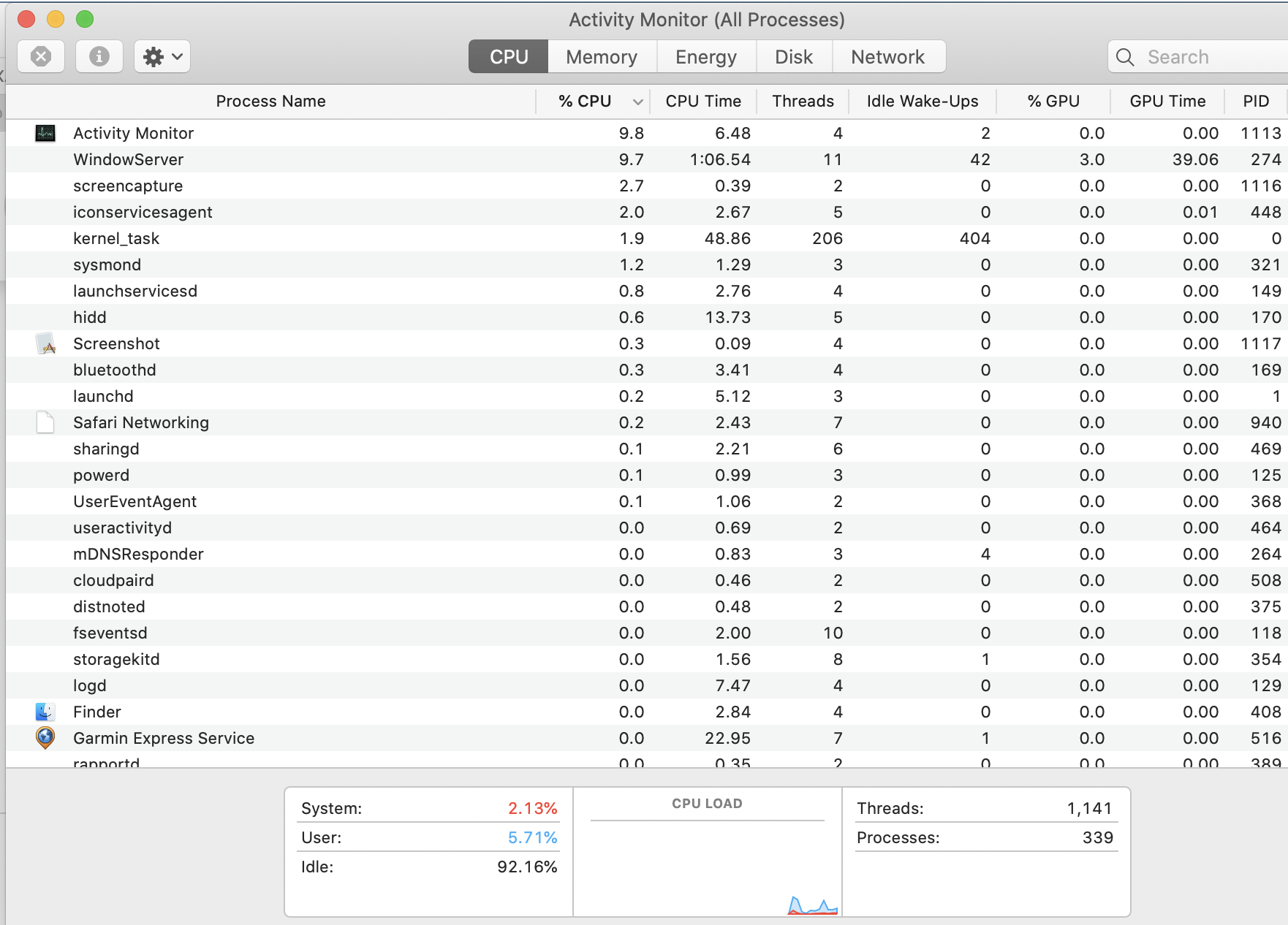 Have a look at the memory tab and see what is using memory. My 2015 iMac was running very slowly when RAM was all used because a Swap File on HDD was in use. In my case it was Music but ......

I'd also observe that since sorting the number of issues and using machine it seems to be speeding up further with time which make me wonder about indexing etc.

Sorry, cannot be much more help.

Thanks for your help. I don't know much about this sort of stuff but it doesn't look to me like I'm using much memory? 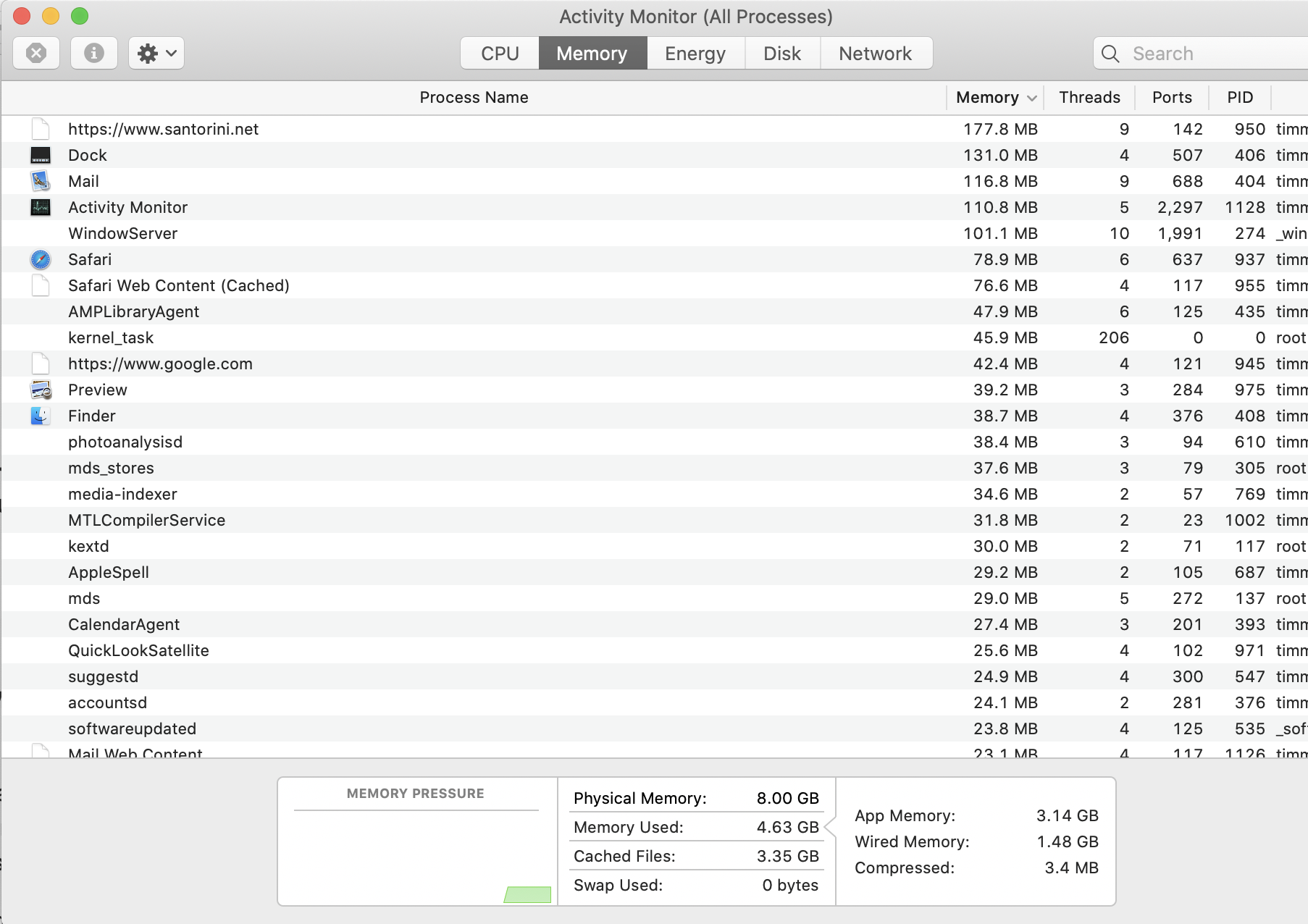 Agree. You don't have a swap file active and memory pressure is in the green. Other place to check is disk tab for similar issues. You now need wiser minds than mine for this one!

my imac seems a little slower too , getting sliming rainbow wheel a lot , never got it before and apps seem to take longer to open.

i ran clean my mac with no help. wonder if spotlight is busy indexing things . memory pressure is in the green also

I saw the spinning wheel a lot yesterday. Applications seemed a bit laggy to open. I seem to be seeing this less with time and my Mac is feeling more "normal". I have a Fusion drive so another possibility could be that frequently used files are being transferred to the SSD side as they were before. I can definitely say things are improving with time.

Thanks for your help, it confirms that as far as I can see there is nothing going on o cause this go slow.

Even after installing the Supplemental Update my iMac (5K, 27", 3.6 GHz 8-Core Intel Core i9, 64GB DDR4, 3TB Fusion) is still incredibly slower than when I was on Mojave. I mean I used to open like 50 folders in the blink of an eye & now you can literally watch each one open because they take about 1sec each now. It's painfully slow. I even installed fresh with no 3rd party apps at all & it was still painfully slow. There are complaints all over the Internet about the speed. So far, everything I have tried has been futile. There is nothing in the Activity Monitor that's using abnormal CPU usage either making this issue even more odd. I hope they address & fix this soon.

My iMac has also slowed down a lot . My Mac mini seems to run the same. I also noticed I have to to a reboot everyday because now memory usage pegs out after about 24 hours running .

I think its the mail app causing this

I have had a Mac since 1989 - the old Classic and System 6 - I can usually troubleshoot but not with Catalina, except for restoring the Dock.

I have tried everything apart from a clean install - reset the PRAM, reset SMC, run Onyx, run CleanmyMac but Catalina is still dreadfully, dreadfully slow on my iBook Pro.

You used to be able to rely on Apple but it is now the new Microsoft releasing buggy software with all their resources going into selling Apps., music and TV.

Partially resolved! After the last update the boot speed has come back to normal (28s for complete boot). The ssd remains slow, 2000 Mb/s of reading speed (instead of 2500 Mb/s with mojave).

I agree that the Boot Speed is faster, but this update by absolutely no means addresses the larger issue. I used to be able to open 50 folders in the blink of an eye, now it literally takes 1 second per each folder, so now I wait almost a minute for this task that only took a few seconds previously. It's completely broken. I'm running on a brand new iMac also & have tested in Safe Mode & a brand new user with nothing running in the background. Exact same stupid results. This is completely unacceptable.

I updated my mac os software from Catalina version ?? to Catalina, version 10.15.1. Afterwards, my internet connection was so slow that it was virtually unusable. After spending a day and various attempted fixes, I am happy to say that the issue has been corrected. My speed is now blazing fast! The fix, for me, was to remove my Trend Micro antivirus software. Supposedly, you are not to install an outside or third party Antivirus software on a mac. I am very proud of myself! Roland Ott Jr.