Question: Q: What has happened to audio/midi support in the Quicktime plugin?

I have a six-month old iMac running Mavericks (10.9.3) with Safari 7.0.4. I use midi a lot when I'm trying to learn a new piece of music, which is often. I don't want to have to download a midi file into another app just to audition the file.

I seem to be in a cycle where over a period of years, additional software is needed for some time and then the feature reappears with an update to either the system or Safari, only to again be deleted. Is it just me?

The outrageous thing is the cost of the Quicktime Pro which in Australia costs AU$37.99 which is more than the cost of the entire Mavericks or Mountain Lion operating systems. I'm sure I've bought this before, but junked it because the feature reappeared, and now it's gone again. I don't want to have to buy it again, particularly not at this price. 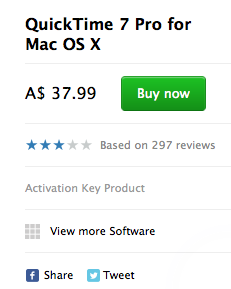 Apple has ended support for MIDI in browser playback but they can still be played with QuickTime Player 7 once you download the file to your machine.

The free version is all you need and MIDI files are tiny and quick to download.

Question: Q: What has happened to audio/midi support in the Quicktime plugin?