Yesterday I received 3 updates via AppStore as shown in the screenshot:

2/3 could be installed, but the update for Xcode didn't work.

The terminal command `sudo softwareupdate -l` doesn't show any available updates. But I'm not sure if softwareupdate only shows system updates usually installed via "Software Update" in "System Preferences".

I tried the update for Xcode approx. 10 times since yesterday and also signed in and out with apple id multiple times.

Can anybody help to either install Xcode or to bring AppStore in a clean state again (in case the Xcode update isn't correct)?

This worked for me: 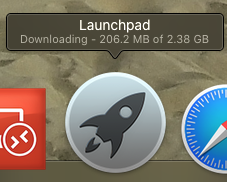 This worked for me:

Perfect, thanks. Worked for me.

Alternatively Xcode can be moved to trash and freshly installed.