My series 3 completed an auto update overnight to Watch OS7. Today it has shut itself down at least 3 times, locked itself while on my wrist about 4 times, failed to load complications on multiple faces (weather, activity rings, date etc), disconnected from my phone at least twice. It has also dropped to less than 50% battery in about 8 hours, normally it is still in the 80’s. Is anyone else having these issues? This has been the buggiest upgrade I have seen.

I’m having the same problems. How did you go back to os6?

since the update to os7 i had constant reboots on my watch , i finally reset my watch back to os 6 and everything fine

I have some of the same issues above. It has also stopped unlocking my MacBook. A very disappointing update.

Hi everyone, I just dropped off my MacBook Pro for warranty service and asked the "Genius" who was helping me about the

Watch OS7 7.01 Software Problem.... He actually acknowledged the issue and said they were working on a fix for the next Software update release....

I see this in the error log. It only restarted 5 times today. "resetcounter". 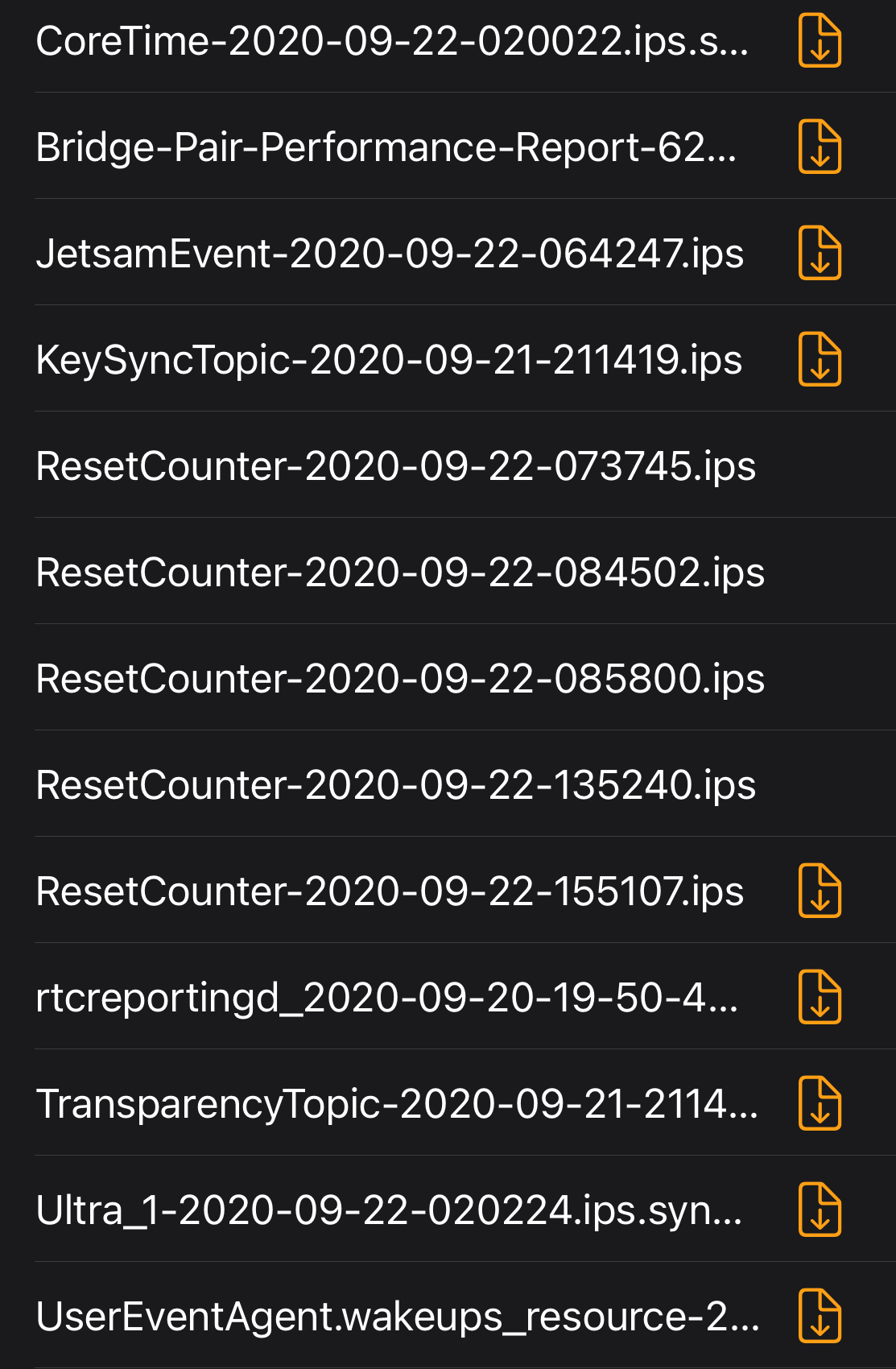 since the update to os7 i had constant reboots on my watch , i finally reset my watch back to os 6 and everything fine

I have some of the same issues above. It has also stopped unlocking my MacBook. A very disappointing update.

I’m having the same problems. How did you go back to os6?

I have a series 3 watch, had to reset it to new to get WatchOS 7 to install

eventually my phone , ipad and watch are updated but lots of crashes

Sry mb , i did a hard reset and i thought that i was back to os6 but it seems that u cant get backwards 😭 hopefully apple fix this soon

I am having a similar issue on a Series 3 Nike 38mm - the first day (9/17) of os7 worked great, but the second day (9/18) it shut down and took quite a while to come back on (I'd guess 3-5 minutes). Today it has restarted once. Complications also take a while to reload after restarting, even if I try to tap them to access the app. The battery has never been low after the restarts (typically above 50%) and the watch is about 4 months old. Never had problems like this with os6.

I have a Series 3 that I updated to Watch OS 7. Ever since the update the battery drains way faster, and I cannot install any apps to the watch. I have tried repairing the watch, rebooting, and hard rebooting it to no avail. If I could I would go back to Watch OS 6. This is the worst Watch OS release I have ever seen.

If you disable Blood pressure (puls on danish) under privacy in the watch app on your iphone, it wont crash anymore.

i disabled it today, and havent had any crashes after that.

Know, there is no blood pressure option under privacy in the watch app. Maybe you have a later model watch than the series 3. There is only the heart rate option, which needs to operate as part of the activity/ fitness applications (one of the reasons for owning the watch)

Sry i mean Health rate. Disable it until fix, and your Watch will not reboot anymore. It’s Working for me.

before I updated everything was working fine and smoothly but after I updated the new Watch OS7 software and I would wear it outside and take my daily walk it would turn off and turn back on, on its own and I feel like the battery also drains a little bit faster then usual. Also I only had this watch for only a month this is a brand new watch I just bought it from target recently so I hope apple fixes this issue as soon as possible because it’s not fair for the people that buy apple products and then there already having issues with there brand new devices.

I had problems even when updating since, erasing all media and music, the space on the watch was not enough for update... I did have to start as a new watch to make the update. After that, the space calculation on my watch seems like to be broken, ads if the update file was still inside the watch but not seen from the counter... More, the apple watch 3 keeps asking me the unblock code (like when I did take off the watch from my wrist before updating...) even if I wear it quite tight ad before... neve happened before.

Many bugs for this update, at least on Apple Watch 3.

I have completely the same issue since upgraded to OS7 on Series3. Delayed weather update, request passcodes when I wear the watch, restarted 1x already. Every time I decide to wait for the first correction update, but now made a mistake, not wait. :-(

I haven’t noticed any issues with it powering off; however, I no longer get all my text messages in my watch series 3 after updating to os7. I only get the messages from iPhone users. I was getting all texts even from Android users until this update. Anyone have this issue?