I have an iPhone 8 running IOS 13.4.1 everything is up to date and was performing well until this weekend. All of a sudden my battery started draining much quicker than previously. Looking at the battery usage it seems that Apple Music is causing it. I have attached two screenshots below; one for the last 24hrs and one for the last 10 days. You can see that up until Friday there was little or no background activity however this jumps massively over the weekend. I have turned background app refresh off for all app and yet Apple Music is still draining the battery when not in use; 53% of battery use in the last 24hrs without using the app.

What has changed and what can I do about it? I even tried uninstalling Apple Music and yet it continued to drain the battery!! 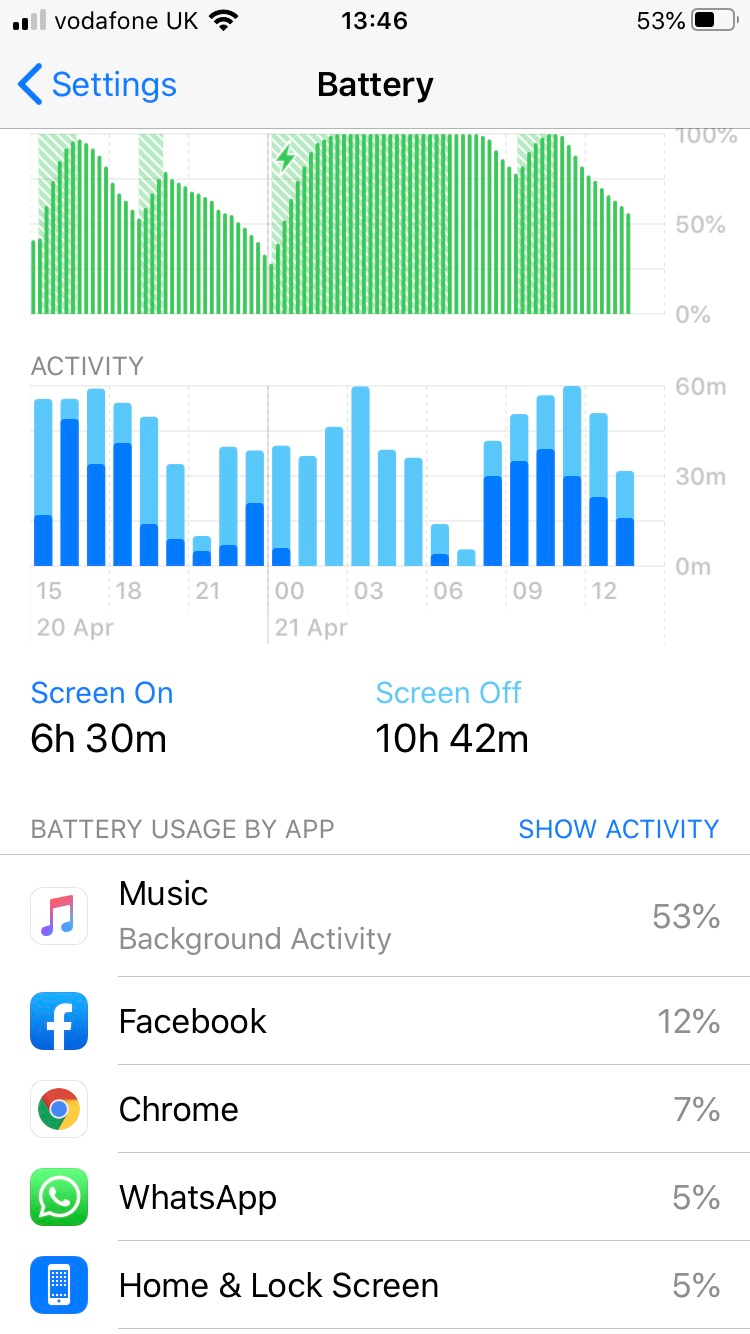 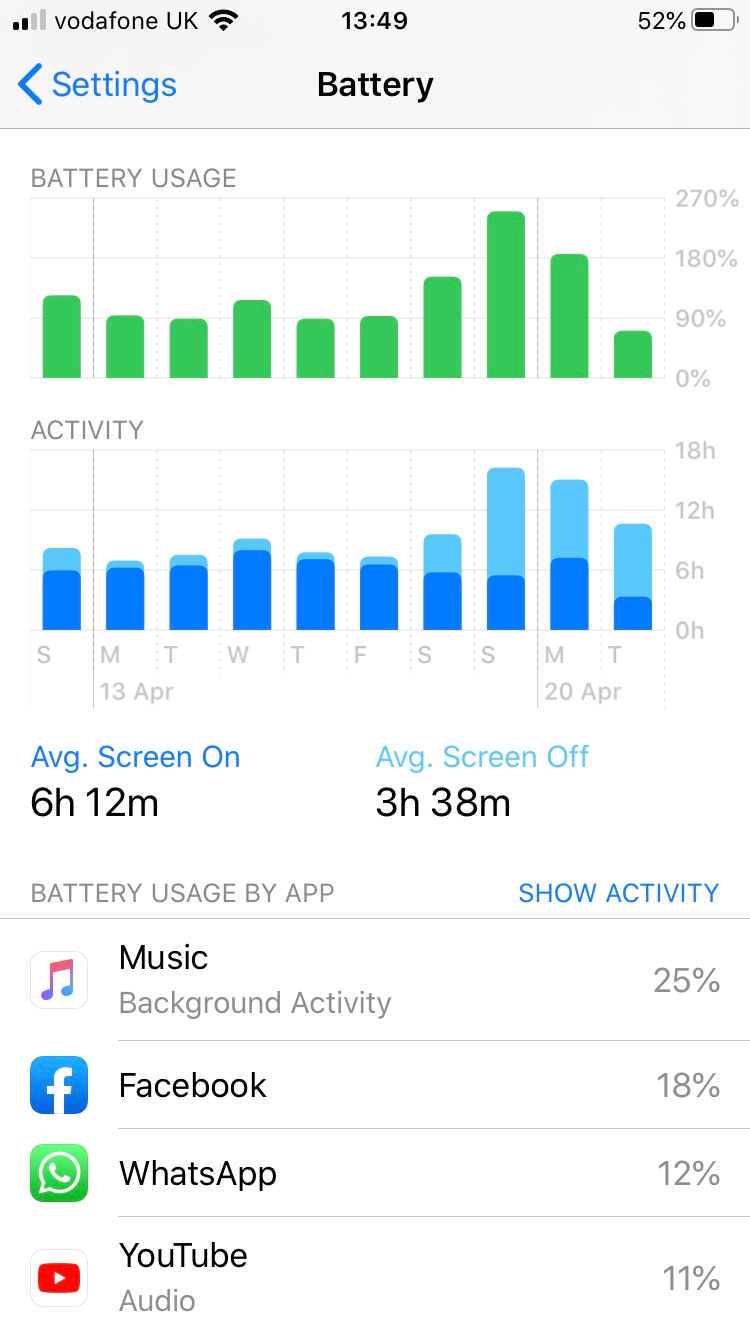 On further testing the problem appears to be being caused by Apple Music trying to sync with my Apple Watch even though I have cleared both the phone and watch of any music files.

If I disconnect my watch from my phone by switching off wifi and bluetooth on the watch, the phone then starts to behave like it used to last week with no abnormal drain on the battery. When I reconnect the watch the batteries on both the phone and watch drain much quicker than they used to. Note that this isn't just because they'll use battery syncing with each other normally as prior to last weekend they were both fine; they'd use battery life obviously but not an abnormal amount.

For example when I went bed last night both were fully charged on 100% and overnight, with no use on either device, the phone drained to 25% and the watch to 30%. All throughout the night the battery monitor shows the cause to be Apple Music and lists it as background activity. Bear in mind that only one week before I was using the watch for sleep tracking overnight which worked perfectly with no battery drain on either device.

I have tried re-pairing the watch and even resetting the watch completely but the problem remains and generic battery saving tips are not going to cure this.

I am having same issue with music background draining battery. What do you do to correct it.

I think Apple must fix this. It drains so fast and the phone is getting hot sometimes. Like this is literally damaging the battery and I am not playing any music, the app has no reason to do anything, I’m not using the Apple Music service, I just bought and downloaded a couple of songs a few days ago then forgot about it, I haven’t even listened to them yet.

This is only due to Apple Music app. And Apple does nothing to fix that. The app drains battery.

I am having the same issue. My phone will be at 100% in the morning and will be at 20% by early afternoon. I even now am putting it in low power mode as soon as it is below 80% to help slow the drain but just realized today the music app, which is not even up and running on my phone, is draining the battery in the background throughout the day.

I ultimately ended up deleting the music app. Haven’t had any issues since deleting. I’m too afraid to redownload it

I've tried all the ideas brought here - it does not work fine even on cleaned phone, with iOS restored through iTunes. So I wait for the update. I'd give a try to iOS 13.6 beta, but it should be no more than few days - I can manage. I just hope, Apple knows what happen on 2 / 3 of July and they will react.

I talked to Apple support on the phone about this. His only idea to fix it was to delete my playlists. He says those are constantly updating. I deleted all of my playlists. The problem is exactly the same. Music Background Activity used 82% of my battery while I was sleeping. All background activity is turned off. I guess I will call back.

Backup your iPhone in iTunes. Restore iPhone from your backup. This fixed mine. Didn’t lose anything.

I've read everyone's replies to try and fix this problem on my super old iPhone (4s maybe?) ... I haven't used Music in ages and I have the Background App Refresh options as Off, yet I was down 50% of my battery in 3 hours and I wasn't even using it!

I deleted the Music app, and now the battery usage activity shows 'Recently Deleted Apps' taking 25% of my battery!

This is ridiculous - I've gone from 99% battery to 49% in one hour, just to read an eBook over lunch.

My previous iPhone crashed because I didn't do the system updates, so now I do each one - but my next phone won't be an Apple if they're trying to force an upgrade with a battery leak.

I have had this same exact problem with my airpods when I connect them to my apple tv to watch a show. They will disconnect and re-connect to my phone. It is like my phone won't drop the connection. I've had to turn bluetooth off on my phone when I want to use my airpods on another device.

I am also experiencing the music battery drain.

The solution for me was turn off automatic Downloads under music an app settings. Then I went into Apple music/library/Downloaded Music And saw that they were pending downloads just sitting there spinning so I canceled all 19 of them. Problem seems to be solved

”Then I went into Apple Music/library/Downloaded Music... and saw that they were pending downloads just sitting there spinning so I canceled all 19 of them. Problem seems to be solved”

Having this same issue. It just started yesterday. I have no idea what I did but my iPhone 8+ started getting really hot and my battery was gone in a few hours. I wasn’t even listening to music and even force closed the app. I’ve shut my phone down for 30 minutes, force restarted it and logged out of iCloud and logged back in, but Music still keeps hogging the battery. It’s using more power than the charger can give it.

when I logged out of Apple Music, I noticed that my down loaded songs weren’t downloading and had hung up. I canceled them, then it tried to sync my library and that hung as well. I canceled those processes and cleaned up my library, but the battery drain still persists 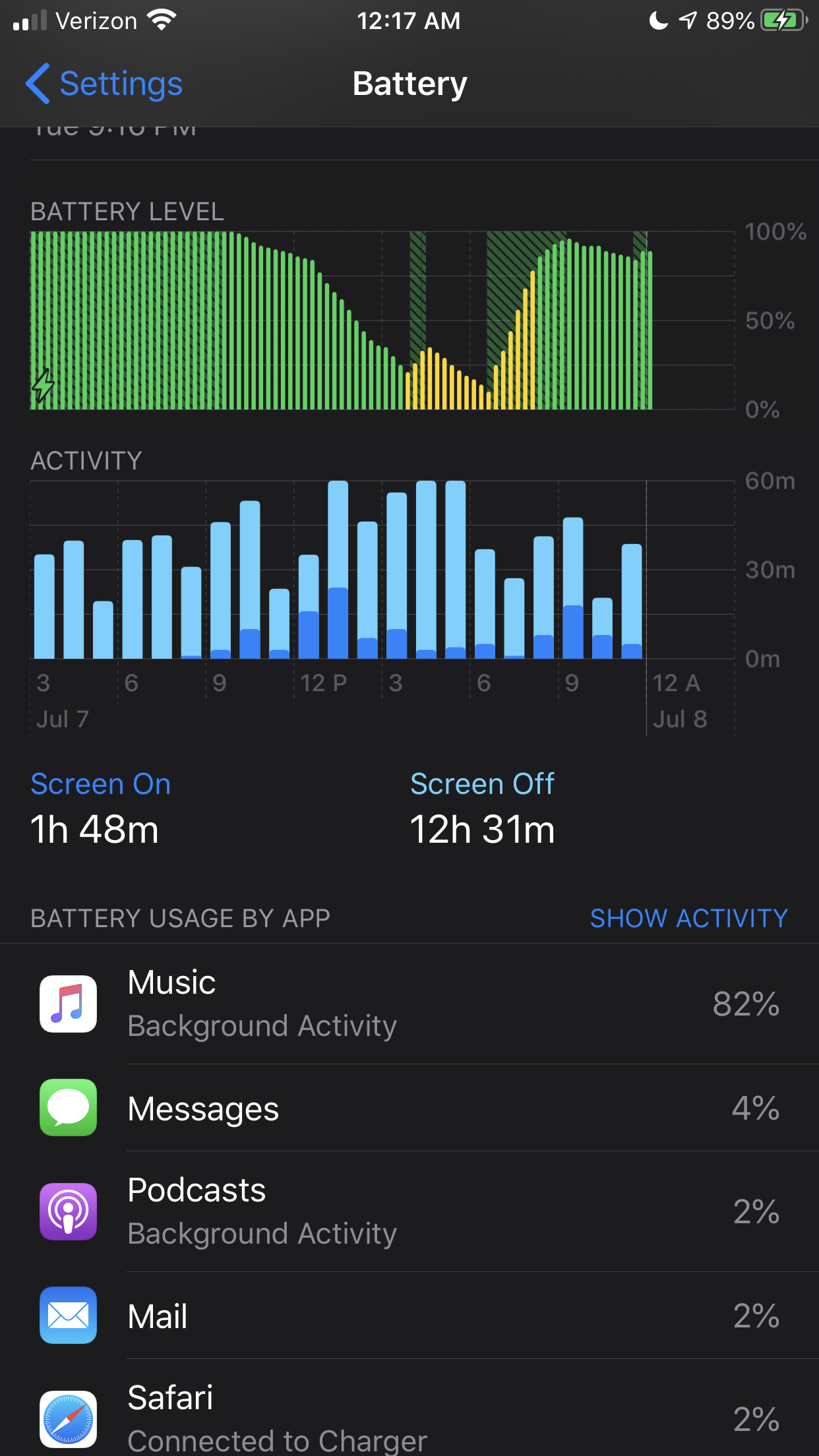 Having the exact same problem. Have turned off background refresh on nearly every app, and have rebooted my phone twice. Same battery drain problem. Phone gets hot and drains rapidly. Don’t want to restore my phone but thinking that may be the only fix...

I just purchased a new iPhone 11 a few days ago, and my battery is crashing so fast. I haven't even used the Apple Music App yet and it says that it has been running in the background for over 18 hours and has used 95% of my battery. My phone is also getting very hot from this. I am concerned this will kill my battery on my new phone. I have turned off automatic downloads, I have deleted the app and reinstalled it, and I have done a hard reset on my phone. I would love to see a solution on this asap!!

I've tried a couple of things, also reinstalling, and there just one thing that helps: delete the app and hope for a fix.

There's also one definite sollution: delete Apple. In the old day's I really loved their products but nowadays I hardly manage to see surplus value. This one could be the straw that breaks the camel's back.

It can be worse: in my case, deleted app used 63% of battery during the night, killed my phone and alarm clock didn't wake me on time :(

I’ve been having this problem for a couple of months now. I did this except I set my device up completely from scratch, the issue was resolved for about 5 days and then came back.